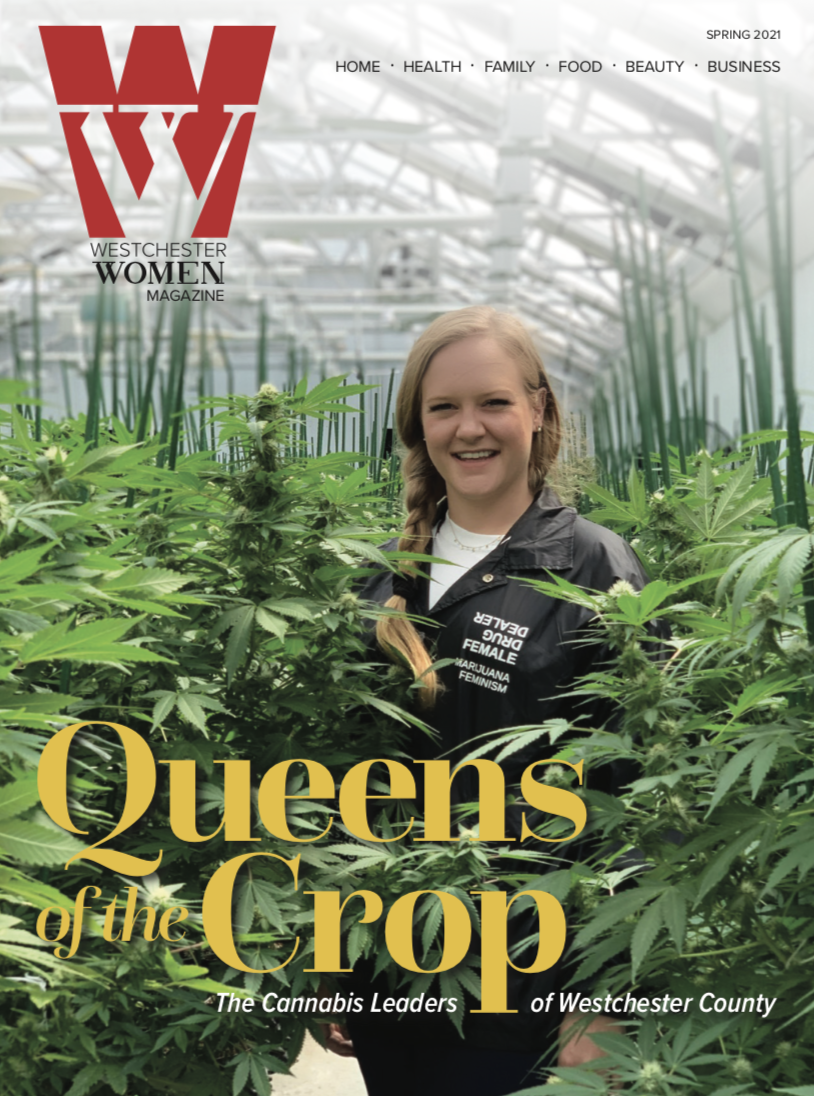 Queen of the Crop - The Cannabis Leaders of Westchester County

Before New York lawmakers started accepting the idea of sending restrictions on recreational marijuana up in smoke, they first embraced cannabis for medicinal purposes. In 2014, New York became the 23rd state including the District of Columbia to legalize medical marijuana with the passing of the Compassionate Care Act.

began when CEO Amy’s own mother Frances, more lovingly referred to as “Granny Franny,” was diagnosed with amyotrophic lateral sclerosis, or “ALS.” A local mom of four and former paralegal, Amy spent countless hours researching the various alternative medicines that could provide her debilitating mother with better palliative care – and each time, came back to the idea of marijuana. She was frustrated knowing there were no legal methods to procure Granny cannabis in New York. Meanwhile, patients in California (1996) and Colorado (2000) had been accessing medical marijuana for many years.

Even after Granny’s death in 2012, Amy’s research into the benefits of medical marijuana continued. In 2014, while Amy’s daughters, Hillary and Keeley, were away at school, New York State passed legislation allowing the use of cannabis for medical purposes. Amy immediately jumped into business mode with Hillary, and soon after tapped Keeley for her knowledge of horticultural therapy which she was in the process of studying at Tulane University in New Orleans. Together as a family, the three women quickly put together a team to build their business with the goal of securing a cannabis license from the state to ensure a way for other people suffering with chronic pain or illness could find easy relief during a time of need.

In June of 2015, Etain Health was one of 42 companies that applied for a cannabis license. The highly competitive application process involved preparing over 1,000 pages of documentation in 30 days including details on where the company would plan to have their dispensary lease, full growth plans, and construction plans for a manufacturing facility. Applicants had to ensure that if they were selected for a license, they would act upon their plan at once with no delays. Together, Hillary and Amy printed all of the paperwork, boxed up multiple copies of the application, and dropped the boxes off in-person in Albany for consideration. In record time, the Etain team had to build a manufacturing plant and cultivation store located in Chestertown in 2016.

A major component of the business plan was selecting a name that resonated with all of the Peckham women. According to Hillary, who quickly became Chief Operations Officer, “Etain is a Gallic goddess in Irish mythology and in many legends she represents women in transformational capacity and is a protagonist. The name we chose was the perfect way to honor my mother’s Irish heritage while giving a nod to a female-run business.”

To date, there are 10 companies with licenses to manufacture and dispense medical marijuana in the state but Etain continues to be the only family run and women operated dispensary of the group. “We’ve made it a priority of ours to give opportunities for the advancement and inclusion of women. For example, in the manufacturing facility, we’re focused on trying to get women back into the workplace after having kids. 70% of our management is women and 65% of our entire company is made up of females,” says Hillary.

Six years after launching, the operation now spans across the state with cultivation and manufacturing taking place in Chestertown, and dispensaries (retail locations) in Yonkers, Kingston, Syracuse and Midtown East in New York City. They’re also employing local experts to work as farmers, engineers, scientists, analysts and even security guards.

While Amy remains in Katonah and Hillary in Bedford Hills, Keeley has moved further north to serve as Chief Horticultural Officer, overseeing the manufacturing at the corporate offices in Carmel. Nonetheless, Hillary says they work efficiently and effectively as a family. “It’s really amazing to see my mother transition from a ‘just’ to watching her in a leadership and business role, especially when she and I were starting the business alone. We were driving around New York state with a desire to fulfill our dream and it’s something I will never forget. I’m grateful to have had the opportunity to be part of this with my mom and witness our business grow together.” The Peckham women aren’t running this Mary Jane business completely on their own. Hillary’s husband serves as Chief Information Officer, and Keeley’s is the head engineer at the 25,000 square foot manufacturing facility where the cannabis is grown and tested.

“Something that has helped us succeed in a restrictive market is that we have a group of people working together that are committed to each other’s success, and to the overall business’ success,” says Hillary. “I’m very proud to say that my family has been able to do all of this together.”

According to the New York State Department of Health, New Yorkers may be eligible for medical marijuana if they have been diagnosed with chronic pain or a severe debilitating or life threatening condition such as cancer, HIV infection or AIDS, ALS, Parkinson’s disease, multiple sclerosis, damage to the nervous tissue of the spinal cord with objective neurological indication of intractable spasticity, epilepsy, inflammatory bowel disease, neuropathies, or Huntington’s disease. Though not explicitly outlined by state regulations, Jordan Tishler, MD at InhaleMD.com says “Cannabis can be very helpful for a range of medical issues including pain management, treating insomnia, anxiety and depression.” Specific to women, Mishler adds, “Marijuana can be an effective treatment for sexuality related issues such as low libido, arousal and lubrication, achieving satisfying orgasm and increasing satisfaction with overall sexual experience. Even the intensity of hot flashes can be diminished using medical marijuana.”

The process of obtaining a medical marijuana card in New York is fairly simple. To start, a prospective patient must find a doctor who is registered with the State’s medical marijuana program. Many doctors can be found through a quick internet search or by visiting the State’s Department of Health’s website. If the physician determines the patient qualifies for usage, the patient then registers with the State for their card that includes their photo, similar in look to a driver’s license. The card is required to visit a dispensary and pick up the recommended product.

Once registered, patients can work with their doctor to have their recommendation sent off to the dispensary for pick up. Cannabis is controlled differently from conventional medical prescriptions. According to New Rochelle-based Integrative Cannabis Physician, Dr. Junella Chin, doctors in New York may write a “recommendation” but it is not referred to as a “prescription.” The discrepancy exists because cannabis is still a Schedule 1 controlled substance under federal law even though it is legal on the state level. Physicians like Dr. Chin who specialize in cannabis medicine are permitted to provide patients with specific recommendations along with other treatment options under the integrative medical care umbrella. Still, many medical doctors aren’t proficient in ratio-ing cannabis, therefore they work hand in hand with dispensary pharmacists to determine the best dosage for each client based on the patient’s conditions and symptoms.

Patients visiting an Etain dispensary will meet with an onsite registered pharmacist who will review their medical history, doctor’s recommendation, and medical conditions. The pharmacist will then present various options of products to best meet the patient’s needs. Depending on the recommendation, a pharmacist may have a great deal of input into the dosing, or they may be required to stick to a certain amount based on whatever the medical doctor has specified. Typically, there is little to no additional input given beyond the doctor’s note from the pharmacist when dealing with children with extreme conditions and elderly patients.

Dr. Chin says the most common misconception is often amongst older patients who are worried about the “high” associated with cannabis. When looking
at medical marijuana, one must consider CBD which aids in stress relief and muscle aches, and the THC component that provides a “high.” By speaking to a pharmacist about ratios, patients can control or avoid the “high” side effect to get the relief they seek.

While it’s not legal to take medical marijuana in the form of a traditional smoking joint, there are plenty of other options including capsules, gummies, oral sprays, oils and patches. Etain has created unique ways to meet the needs of their clients as they’re the only dispensary in the state to offer the product in the form of lozenges. For patients looking for something more discreet, Etain created a water soluble powder that can be used in baking or with hot or cold liquids. Hillary says that while smoking isn’t allowed, many customers opt to purchase the raw plant-material in the form of ground flower to use in a vaping device – adding that vaping medical marijuana hasn’t been studied enough to know if it’s harmful to the body but many users feel they’re getting maximum benefits since this manner offers the purest form of the plant.

Dr. Chin says, “Cannabis is the hottest thing right now especially in Westchester because it’s cheap. It’s not covered by insurance so you’re looking at spending at least $120 on a bottle but that could last two to four weeks depending on the dosage.” When it comes time to refill, the process is fairly simple and similar to refilling a conventional prescription.

As New York State prepares green light various uses of marijuana, Dr. Chin is hopeful cannabis will become even more accepted in the mainstream in the medical community. For years, her patients have been securing relief with cannabis – sometimes even replacing one or more conventional medications like Klonopin or Ambien that only treats one symptom, with medicinal marijuana which serves as both an anti-inflammatory while simultaneously improving mood and sleep.

Like any conventional medicine, cannabis has benefits and risks. Tishler shares, “I’ve seen issues from over intoxication in the new patients but the larger issues stem from the fact that the cannabis industry is relatively unregulated. Companies say all sorts of things about cannabis that aren’t backed by science, and often people are encouraged to buy and use more than what is good for them. “He recommends always starting with the lowest dose and sticking to the treatment plan from your Cannabis Specialist physician.”

Tishler stresses that cannabis won’t address all problems but is great for treating many common symptoms. Cannabis is not commonly addictive, and while cannabis-use disorder is over-diagnosed, it does exist. Tishler encourages his patients to only get their products from a regulated facility to ensure they are safe. As more and more products in industries such as wellness and beauty claim to contain CBD, it is imperative consumers do their homework. Many products aren’t tested for contaminants since cannabis isn’t FDA-approved, which means there isn’t always oversight in testing mass products that don’t come from a dispensary, and not every product’s website is transparent. With regard to CBD specifically, Tishler states the scientific evidence does not support any of the claims being made, and routinely recommends against patients using CBD until further studies are done. He even calls CBD “The Emperor’s New Clothes.”

The Peckham women hope the medical program continues to grow strong within New York so they can continue to produce their life-changing treatments. This year, they will continue to expand their Etain brand offerings including the launch of their own CBD as well as more strains and products in the THC line. Simultaneously, experts in the field are working to widen cannabis-use awareness so that more people can take advantage of this alternative medicine. As marijuana becomes more accessible and acceptable, it’s possible the negative connotations of this taboo plant will soon disappear like a puff of smoke.