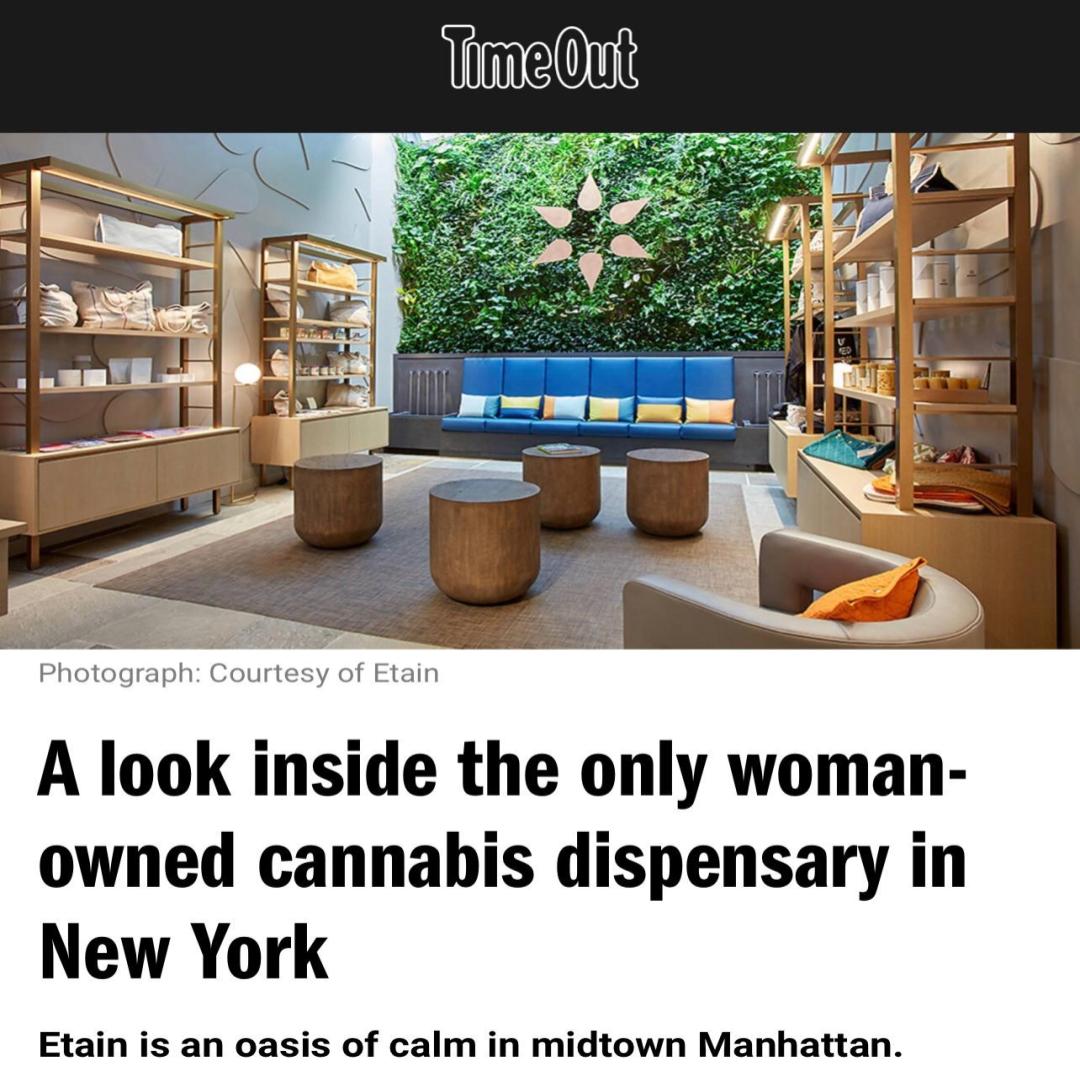 When thinking of weed dispensaries, especially in light of the relatively recent legalization of recreational marijuana in the state of New York, thoughts don't necessarily drift to soothing, spa-like destinations offering the sort of calm that is usually associated with self-care. And, yet, that is exactly what Etain, the only cannabis dispensary in New York that is owned by women, feels like. (In Irish mythology, Etain is a Gallic goddess who represents women in a transformational capacity.)

The medical marijuana business on East 58th Street between Second and Third Avenues is the brainchild of Amy Peckham and her daughters Hillary and Keeley. In addition to the New York City flagship, the women own shops in Kingston, Syracuse and Yonkers—technically maxing out the amount of stores that they are allowed to operate under a single license in New York.

In total, there are only ten licensed medical marijuana dispensaries in the state of New York—and Etain is the only one owned entirely by women.

Interestingly enough, according to current regulations, all companies in the industry are also to be vertically integrated, which means that Etain not only sells medical cannabis but also grows it (they have a facility by Lake George).

That, however, might soon change when the new Marijuana Regulation & Taxation Act (MRTA) kicks in. The new bill calls for the dismantling of the vertical integration guideline, hoping to create job opportunities throughout the industry—allowing some folks to work in production, others in distributions and others in sales, for example.

But, for now, the company is operating under current parameters, which allow them to sell THC products (THC is the main psychoactive in cannabis and it is what gives you the high associated with weed consumption) to folks with a medical prescription, which they can obtain when diagnosed with one of ten qualifying conditions, including oncology-related matters, epilepsy, post-traumatic stress disorder and chronic pain, among others.

Etain is also allowed to sell CBD products to all those who are interested—those don't contain THC.

The dispensary has also made it a point to propel other women-owned businesses forward by only selling CBD products made by such companies. Upon entering the premise, you'll notice CBD olive oil by Potli, an operation based in California, CBD fruit chews and chocolate bars by Portland-based Grön and even beauty-infused sheet masks by women- and minority-owned NFZD Beauty. The company's own CBD line, which will feature lotions and tinctures, is also launching later this month.

On the first floor, patrons will get to consult with the licensed pharmacist that is always on duty to discuss dosages, types of products and more.

The destination also features a second floor that overlooks the space's main drawn, a wall filled with beautiful green plants (yes, someone regularly comes in to prune the wall) that contributes to the spa-like feel of the place. According to a spokesperson, the second floor will eventually be used as an event space.

Although the women behind the company are positioning themselves to change things up once recreational marijuana actually becomes a thing around here, New Yorkers should feel free to visit Etain right now to learn more about the products and relax in an oasis of tranquility in the middle of the hustle-and-bustle of midtown Manhattan.