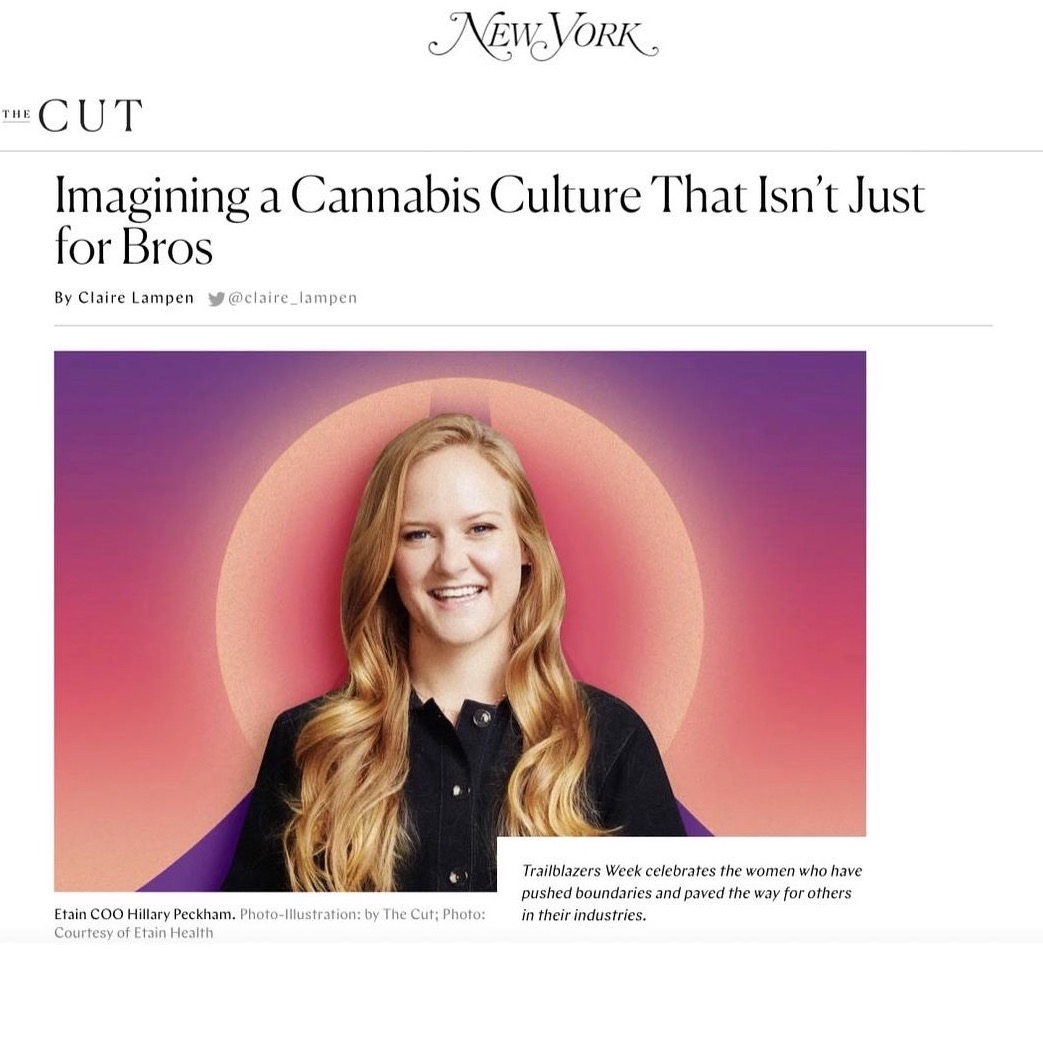 When one thinks about leaders in the cannabis industry, a very specific kind of guy (and it is a guy) comes to mind: white, on the young side of middle-aged, possibly wearing prayer beads. Several versions of this man appear in a 2019 New York Times story about the biggest CBD company in the business; they top MJBizDaily’s list of the highest-paid weed entrepreneurs in the country. Business Insider estimates that white men hold 70 percent of C-suite positions at North America’s largest publicly traded cannabis companies. Hillary Peckham is among the women working to change that image.

Peckham, 30, is the chief operating officer of Etain, a medical-marijuana company she co-founded with her mom (Amy, the CEO) and sister (Keeley, the chief horticultural officer) in 2015. Theirs are the first woman-owned and -operated dispensaries in New York State. The Peckhams started Etain in memory of Hillary’s grandmother, whose ALS diagnosis prompted them to research alternatives in palliative care. Now that recreational marijuana is legal statewide, they are preparing to expand their product line into the adult-use market. Hillary spoke with the Cut about creativity in the face of government regulations, representation, and dealing with self-doubt.

Tell me about your first job.
I started Etain right out of college. The only jobs I had prior to that were summer jobs. I was a swim-team coach for five years for ages 3 to 18. I got a lot of management expertise, the ability to teach people, through that. But really, this is my first and my only job experience in the real world.

Did you have a mentor or an inspiration? It’s my impression cannabis is a pretty male-heavy industry — who did you model yourself on?
We were really fortunate to find the organization Women Grow. Right as we were starting to research the industry, they had their very first meeting, and it happened to be in New York. The organization is very inclusive, and the goal is to try and help women meet each other and get into the industry. We also did our first collaboration with a poet named Jasmine Mans — she started the company Buy Weed From Women. We had a holiday box that we put together with them.

Describe a professional failure you experienced along the way.
Honestly, with start-up companies, there are too many to name. There was one point when cannabis businesses — this was five, six years ago — weren’t able to purchase alcohol, which is required for certain extraction mechanisms or even just cleaning. But we weren’t allowed to buy alcohol in bulk because we were federally illegal, so we had to find other ways. Everclear is a substitute; we were sending our employees out to liquor stores to purchase Everclear. We have had to constantly shift with updating regulations, innovating and adapting. I think that anybody who’s in this industry has to be ready for that.

You are not the only woman working in cannabis, but you are the first in the state. Is that isolating at all? Do you ever wish people would not center that fact of being first and instead center the work?
It depends. I think it’s really valuable to have women in the industry, and to set that example, and to promote women. It has definitely been difficult to get recognition, and it’s not something you get extra credit for. You have to work harder. But I wouldn’t change anything.

Another challenge for me is, when I started this, I was 23. And I look like I’m 10, so when I walk into a room, it’s very easy to assume I’m an intern or something like that. Many people questioned if I’d graduated college or was old enough to be in the cannabis industry. It’s been challenging just to exist in the space and get respect for all the work we have done, but it’s something I think is really important to set an example for others and to maintain because there aren’t a lot of opportunities for women-owned businesses in the space, and it’s very challenging to operate. We also make it a priority in all of our lobbying efforts to make sure women are represented.

Have you ever felt like there have been people in your industry, or just in any professional setting, who didn’t want to see you guys succeed?
Right now, we’re different from any other company. We have different priorities, and we have different strategies for how we have to survive. As a public-owned company, you can lose money for a long time. Your operating budget doesn’t need to be balanced. Whereas if you are a small, privately held family-owned company like Etain, every dollar matters. And to qualify as a women-owned small businessUnder the Marijuana Regulation and Taxation Act, there’s specific criteria. We can’t hire more than 100 employees or else we won’t qualify as a small business. If we don’t qualify, then we will be subject to very high fees to enter the adult-use program that we probably can’t afford. But we’re the only ones that would be impacted by this because we’re the only women-owned business. I can’t leverage the support from the rest of the industry because they aren’t like me; it’s not a priority. It’s much harder to get recognition when you’re just one.

The cannabis industry is pretty heavily male, but it’s also pretty heavily white, whereas Black and brown people have historically been the ones who suffer when weed is criminalized. Now that it’s being legalized, white people still tend to be the ones resourced enough to profit off it. I’m wondering how you think about that imbalance.
﻿Where we have tried to contribute is not just in advocating for women-owned businesses but small and diverse businesses — what they would need to see in a regulatory capacity to actually be able to operate successfully and survive more than two, three years. I know that in the adult-use program, New York is considering loans and grants through economic state development, government programs. When we applied, we were actually granted it, and then they revoked it a day later because they were not able to figure out how to deal with all the red tape. We weren’t actually able to functionally get anything through the state. So we have been bringing awareness to that experience, trying to assist local government to be able to execute on these loans, things that will be really important for diverse businesses entering the industry.

The funding in general, particularly for minority-owned businesses, is very difficult. And then in the cannabis industry, because you can’t get a bank loan or anything like that, it’s even more challenging. The current regulations have a very high operating cost to them, so how can you adapt regulations to make it more affordable while still maintaining the integrity of the program? Those are the conversations we try to have. We have unique experience regarding what would be helpful in allowing for social-equity licenses, women of business, diverse business to really get off the ground here and be successful. We talk to our elected officials to make sure they’re aware of these hurdles. It’s one thing when you have a law that’s passed, but then how it’s actually executed in a business capacity, that’s very different sometimes.

Do you ever experience self-doubt?
Always.

How do you deal with it?
I just had a baby, and it’s sort of similar — Etain is like my first baby because you’re just always worried about if you made the right choice or if everything’s going to work out, and you want to do the best for all the employees.

I’ve learned to focus on getting things done and to keep working and to show up every day even when I’m second-guessing myself or I don’t necessarily feel great about a decision. Always keep moving.

Working with your family members: What is that like? Like, you love your family, but sometimes you want to murder them also.
COVID was hard. My work bubble was my family, and my family was my quarantine bubble. There’s no days off, you’re always talking with each other. At this point, we’ve settled into a pretty good rhythm for how to negotiate the family side and the work side. But there are definitely days where I’m like, I just need a day off from talking to you. I think everyone feels that, but we all definitely know how to have fun together, and we’re pretty close, so it works.

We are also very blessed in that each of us has a different skill set: I can plan and strategize. My sister turned out to be a really great and creative photographer; now she does all the Instagram pictures for us. She’s also a horticulturalist, so she manages the cultivation. That’s not something I could ever do. My husband runs all of our IT systems. He’s the CIO, and my brother-in-law is an engineer, so he does all the production. We’ve all found the things we’re good at that are different from each other.

Have you ever received a piece of advice that proved to be terrible?
Well, I don’t know if this is advice, but when I originally was at a networking event and saying I was applying for a license, someone told me, “Don’t apply. I’ll hire you as my secretary.”

Let me guess: Was it a guy who said that?
Yeah, it was. He said, “And then I’ll teach you real business.” I told him I was going to get a license, and then I’d hire him. I did get a license.

Did you hire him?
Nope.