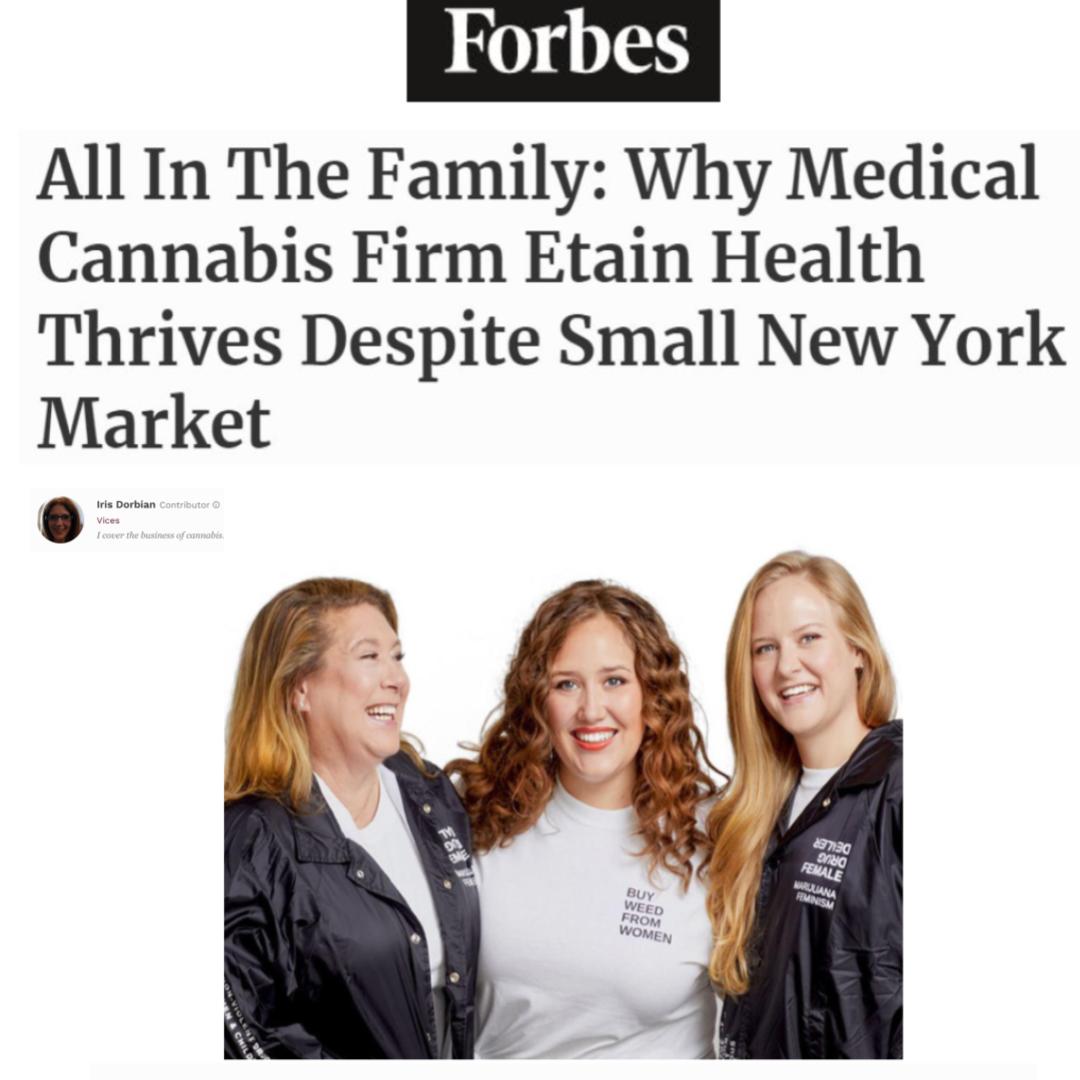 If there is a secret to the success of Etain Health, a six-year-old New York-based medical cannabis company, it would be their perseverance and fortitude in the face of overwhelming obstacles. Not only has the women-owned and operated business been able to flourish in an industry where men predominate, it has done so within a painfully small market. Another remarkable feat: Etain has been able to stay afloat during a pandemic, even expanding their retail presence to a new flagship location in New York City, adding to a total of four dispensaries, while launching a rebranding and product reformulation.

As Hillary Peckham, Etain’s chief operations officer noted, these challenges only fuel and fortify the company’s unswerving commitment to their patients, community and mission. "We are born and bred New Yorkers," she explained when discussing why Etain has chosen to stay put in a market where there are only a handful of licensed medical marijuana businesses, most of them large multistate operators. "I’m a fourth generation New Yorker. It had made sense to do this here and around us in the immediate area."

Yet launching and growing a business in a market where getting a license can be a difficult process, forcing some entrepreneurs to relocate, hasn’t been easy. It doesn’t help that New York lawmakers have imposed constraints on the patients qualified to receive medical cannabis, according to Peckham.

"We thought that the program would follow the trends of other states where it would start to be restrictive and expand," she said. "This is still pending and hasn’t seen the growth of other markets."

Another problem Etain encountered early on although Peckham said it hasn’t been an issue recently has been sexism. “It was most prevalent when we were applying for [a license] for the business and I would go to networking events and other [male] applicants were there,” she recalled. “Most often they would tell me I should work for them as a secretary for a few years and learn about the business from them until I got a managerial position.” (Peckham did get her share of  schadenfreude later on as most of these applicants ended up not getting licenses).

Like many other successful medical cannabis businesses, Etain Health has a personal component to its origins. "My mother [Amy] was a caretaker for my grandmother who had been diagnosed with ALS," related Peckham. "In looking for palliative measures, doctors had recommended we look into cannabis." Sadly, her grandmother passed away before having the opportunity to sample cannabis as a therapeutic measure.

However, the information her mother gleaned about the efficacy of medical cannabis intrigued her so much that when New York legalized medical marijuana in 2014 with the passage of the Compassionate Care Act, Amy called daughter Hillary about forming a business in this space. At the time Peckham was still in college and struggling with her own health crisis.

"I had hip surgery that failed so I was unable to walk for two years," she revealed. "So I had an understanding how pain is mismanaged in this country. I did my own research [into cannabis] how it gave people greater quality of life.”

With Amy as CEO, sister Keeley as chief horticultural officer and Hillary in charge of operations, Etain Health was launched in 2015. Currently, Etain, which also cultivates and manufactures its own products, has a staff size of 60.

Peckham said the family dynamic has helped Etain Health survive as a smaller mom and pop shop in an anemic market. "I think in some ways it’s given us the ability to be more nimble and flexible because we all have the same goals and work really hard," she maintained.

When asked what tips she would give to other women seeking to launch businesses in this sector, Peckham is full of wisdom forged from the crucible of experience and resilience. “It’s really important to make sure you vet any business partners you take up in this space,” she advised. “There are a lot of people who take advantage of the green rush and they can be non-trustworthy and don’t have the business acumen. Also, compliance is key. If you’re in this for a quick dollar, it won’t be worth it for all the hurdles you face. You have to be passionate for what you’re doing.”